MERRY CHRISTMAS FROM WHEEL IN THE SKY

This is the Christmas Card that The Steve Perry Information Network sent out for Christmas 1984; 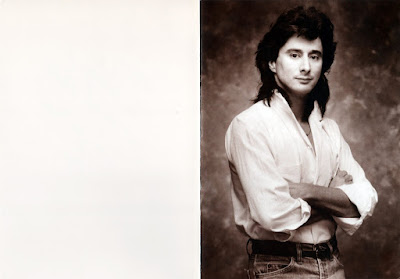 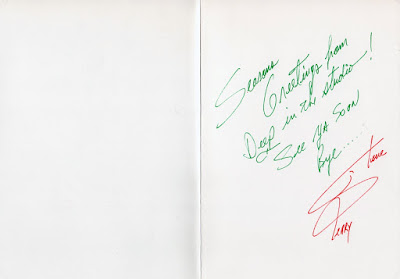 Apparently He's again in the Studio working on an album for a 2016 release.
What the World really wants for Christmas is a reunion with his old band, Journey.
Posted by WheelInTheSky at 10:00 PM No comments:

The Journey Force Newsletter from May 1, 1985 concludes this week

The first page this week lists more of the contest winners. The 2nd half of the page is dedicated to Answering Questions and explaining yet again what the volunteer task force is and how it works. (it never worked)

The next page, the "Mailing with Department Codes" page which was always a favorite once again explains how to send mail to The Journey Force in the most convoluted way possible.

Once again we have a third merchandise page for the Frontiers items they are trying to get rid of to make room for the new album merchandise. 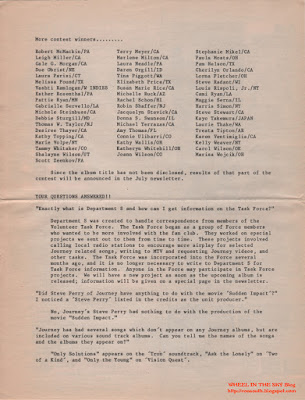 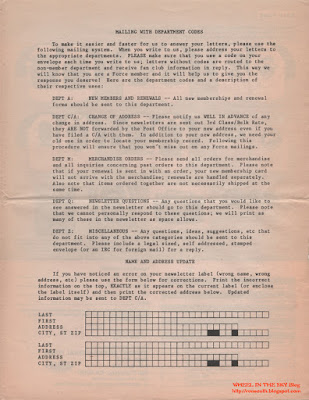 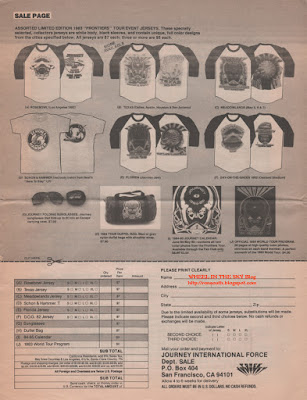 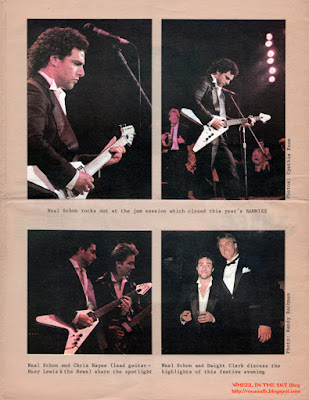 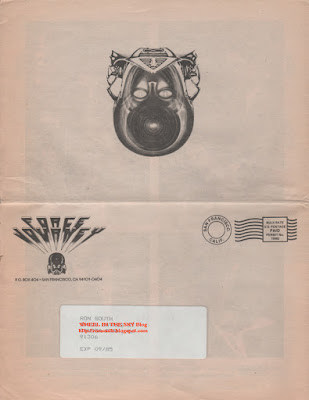 Journey's Frontiers Tour began on February 22, 1983 in Nagoya Japan. That same night the Frontiers Album was released in the U.S.A. The first U.S. Date was on March 28, 1983 in Seattle Washington. The tour continued until September 6, 1983 where the last date was played in Honolulu Hawaii at the Blaisdell Arena.

The Cover of the giant Tour Book is a solarized blue and red version of the Frontiers Album Cover depicting Elmo's Head.

The next two pages included this week are combined so that it can also be used as a poster. If possible I'll create a text file of what's printed on the left and post it next week. 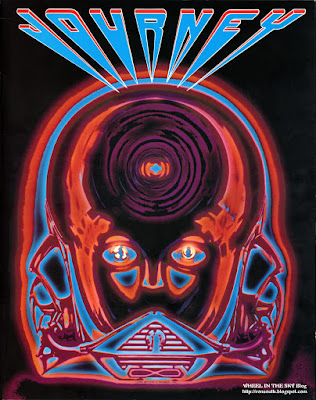 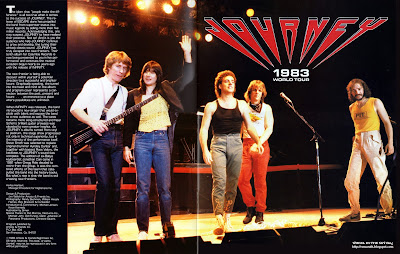 For the next few weeks I will be posting the entire tour book, so stay tuned....

The Journey Force Newsletter from May 1, 1985 continues...

This week's edition includes pages 4-7 of the Newsletter from May 1985.

The next page lists all the contest winners in the "Easy as 1-2-3 Contest". There were 5 1st place winners and 100 second place winners.

The following two pages are the merchandise pages. The Frontiers Satin Jacket goes for a mere $35.00. If only I had gotten one. 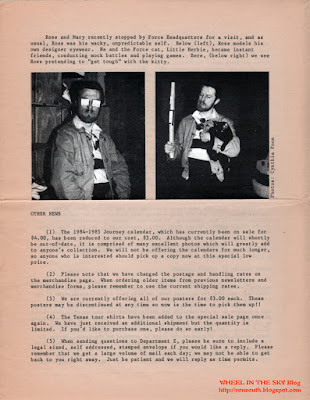 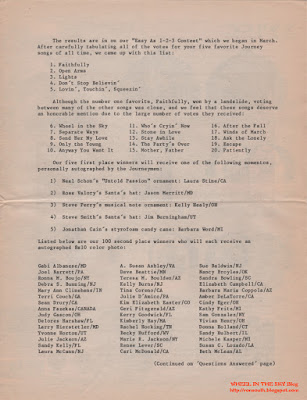 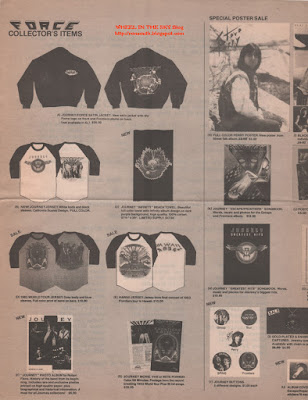 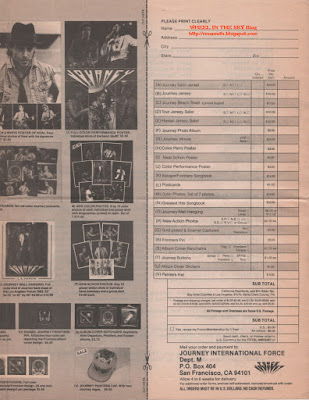 December 13, 2015 on "Off The Record" with "Uncle" Joe Benson is an interview with Steve Perry. 
More information can be found at either of these two sites;

Today, December 10, 2015, Steve Perry confirmed on the radio that he is indeed in the Studio working on a new album for a 2016 release.

It was on 100.3 The Sound in Los Angeles, where the Mark In The Morning show when Steve Perry called in to say happy birthday to radio DJ and personality, Uncle Joe Benson.

Steve mentioned that he used to be in a band and that he has been in the Studio for the past 6 months recording and trying different things. Sometime next year is when he said he would release the album.

I was unable to record it as I was driving at the time.
Posted by WheelInTheSky at 8:31 PM 3 comments:

The Journey Force Newsletter from May 1985

The May 1, 1985 edition of the Journey Force Newsletter begins with the 8th Annual Bay Area Music Awards (BAMMIES) with Steve Perry winning 2 awards!

Pictures from the BAMMIES can be found on page 2 of the Newsletter.

The 3rd and last page this week gets down to business with more Steve Perry news and the "We Are The World" album in the "USA for Africa Project".

Steve Smith news is also included while his jazz group goes on hiatus while he works on the upcoming Journey album. There's also a small hint towards Steve perry, Neal Schon, and Jonathan Cain as the main members of the band. It will be very interesting to see how this all plays out over the next few months until the album really does arrive in 1986.

We conclude this week explaining special seating offered by the Force at Journey shows, followed by a full explanation of what it is and how it works. It really didn't work unless you were able to camp out in front of the venue and be close enough in line while Ticketron was also selling the same tickets all over town. 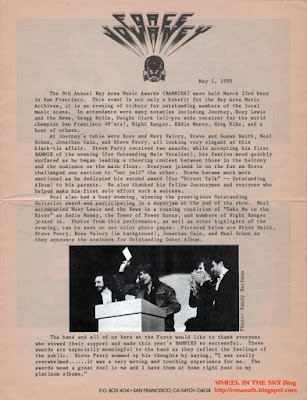 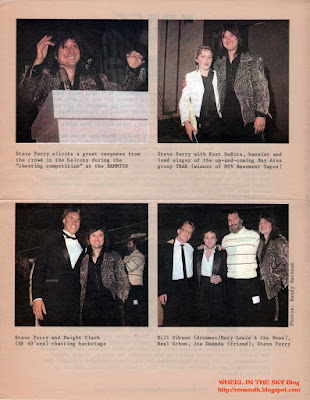 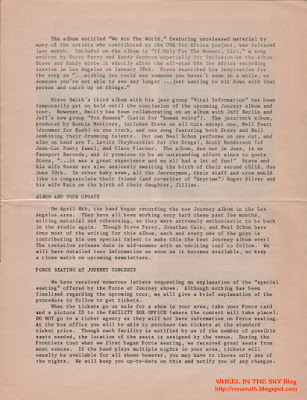