An Interview With Steve Perry...

The first two pages of the Journey Force Newsletter dated January 1987 is all about Steve Perry! 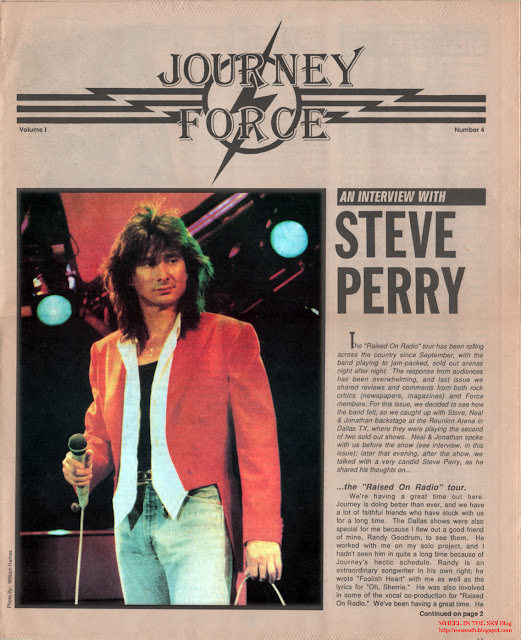 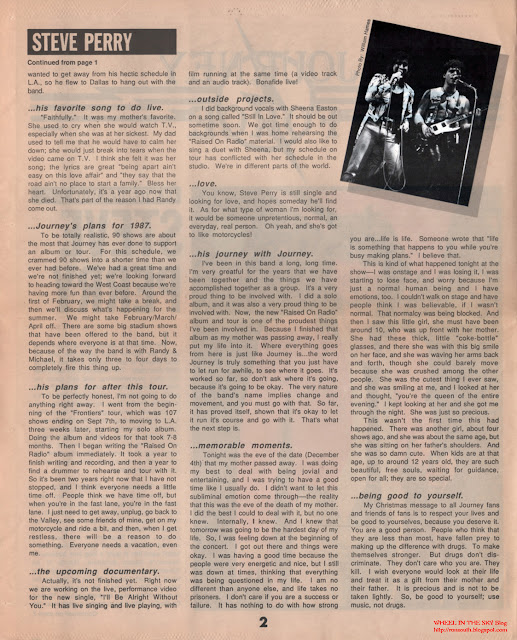 Journey played the Alpine Valley Amphitheater in East Troy, Wisconsin with Point Blank on September 5 and 6, 1981!

WLS Radio promoted Journey in East Troy, WI during The Escape Tour. This stop in East Troy was still very early in the Tour. Journey would go on to play until December 22 and then again the next year, 1982. The opening band was Point Blank.

East Troy, Wisconsin had a population of just under 2400 in 1981. The village has a total area of 4.51 square miles. It is a very small Historic Town that is easy to get to from any direction. People from all over were able to get to East Troy very easily. 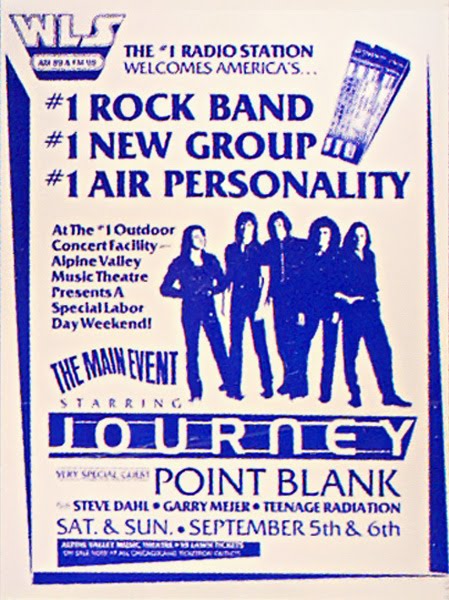 During Robert Fleischman's short run as lead singer of Journey is a very interesting period in Journey's history.

Columbia Records never did release any Journey songs sung by Robert Fleischman until the Box Set, "Time3", released in 1992. This Box Set only released "All For You" (listed as "For You" on the Set) which leaves much more left out there from Robert.

I've recut and added some additions to a great performance of Gregg Rolie, Neal Schon, Aynsley Dunbar, Ross Valory, and Robert Fleischman on vocals. This performance is from the Diamond Head Crater Music Festival in Hawaii on July 4, 1977.

Herbie Herbert - One Man's Journey - An Interview from 2008

Herbie Herbert is one of the music industries most colorful characters. For a period of time he was the #1 manager in the business, taking Journey – a band he put together with Neal Schon – to become a multi-Platinum selling stadium act.

In addition to his work with Journey, Herbert brought Swedish rock groups Roxette and Europe to the United States in the mid to late-1980s. He managed Mr. Big and R&B artist Tara Kemp and rock band Signal.

In the late 1990s, Herbert moved from backstage into the spotlight, recording three albums as Sy Klopps and touring the San Francisco Bay Area with the Sy Klopps Band, which has included current and former Journey band members Neal Schon, Gregg Rolie, Prairie Prince, and Ross Valory.
Posted by WheelInTheSky at 10:00 AM No comments:

Bill Graham is a Producer and Concert Promoter that worked with Journey in the late 1970's and early 1980's. Bill was responsible for the extended 1982 Escape Tour in huge Stadiums and Arenas.

In tribute, on November 3, 1991, a free concert called "Laughter, Love and Music" was held at Golden Gate Park to honor Graham. An estimated 300,000 people attended to view many of the entertainment acts Graham had supported including Journey.

Concert Promoter Bill Graham was killed in a helicopter crash on October 25, 1991. The Bell Jet Ranger flew directly into a 223-foot high-voltage tower near Highway 37, which runs between Vallejo, California and Marin County, California. The helicopter burst into flames on impact. The charred remains of the helicopter hung eerily in the tower for more than a day.

Escorted by motorcycle police, more long black limousines than had ever before been seen at a private funeral in the city of San Francisco formed a phalanx for the procession to the cemetery. Bill was to be buried in Colma, a small town south of San Francisco.

Following his death, his company, Bill Graham Presents (BGP), was taken over by a group of employees. Graham's sons remained a core part of the new management team. The new owners sold the company to SFX Promotions, which in turn sold the company to Clear Channel Entertainment. The BGP staff did not embrace the Clear Channel name, and several members of the Graham staff eventually left the company. Former BGP President/CEO Gregg Perloff and former Senior Vice President Sherry Wasserman left and started their own company, Another Planet Entertainment. Eventually Clear Channel separated itself from concert promotion and formed Live Nation, which is managed by many former Clear Channel executives.

In tribute, the San Francisco Civic Auditorium was renamed the Bill Graham Civic Auditorium. On November 3, 1991, a free concert called "Laughter, Love and Music" was held at Golden Gate Park to honor Graham, Gold and Kahn. An estimated 300,000 people attended to view many of the entertainment acts Graham had supported including Santana, the Grateful Dead, John Fogerty, Robin Williams, Journey (reunited), and Crosby, Stills, Nash & Young (reunited). The video for "I'll Get By" from Eddie Money's album Right Here was dedicated to Graham. Graham's images and poster artwork still adorn the office walls at Live Nation's new San Francisco office. With the band Hardline, Neal Schon of Journey composed a piece entitled "31–91" in 1992 in Graham's honor.
Posted by WheelInTheSky at 8:00 PM No comments:

Steve Perry was Journey's lead singer from 1978 to 1997. He has been sorely missed ever since. Everywhere he shows up, he causes a frenzy. Whether he goes to a baseball game, or a coffee shop, when he's in public, he is almost always noticed and surrounded by fans. This is 20 years after leaving the band.

Teenage girls are still infatuated with him and post his pictures whenever they can. His name and face shows up in some of the greatest places. He once showed up on the couch in my office at work, really. He was very nice and he's always very gracious when he meets the fans.

He is mentioned in movies, TV shows, radio, and even in cartoons. I found him even mentioned on E!'s "Hollywood Medium with Tyler Henry". It seems Tyler's mother is still in love with Steve Perry. That's the one person she would really like to meet. She even wants Tyler to do a "reading" on Steve Perry.

Here's a setup of the show and then the clip...

Posted by WheelInTheSky at 8:00 AM No comments:

Herbie Herbert was the mastermind behind it all. He got Neal Schon, Gregg Rolie, and Ross Valory together to create a band that would catapult into superstardom and fizzle out in a flash. He came up with the album names and artwork. 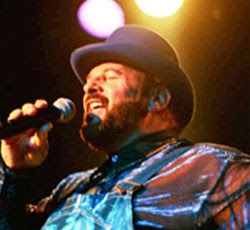 This is the very hard to find interview from 2001 called "Castles Burning". He tells it like he saw it, and felt it.

Posted by WheelInTheSky at 10:00 AM 4 comments:

The Raised On Radio Tour started out as Journey greatest Tour ended with the breaking up of what was left of the band.

Through all these years since 1973, Journey has proved to be a great band with four members.

Journey has proven to be one of the World's greatest bands with five members.

This attempt with three members though, will soon prove to be a disaster.

At the end of the Raised On Radio Tour, in 1997, the band went their Separate Ways and it wouldn't be until November of 1991 that we would hear from them again.

Here is the back cover of Raised On Radio Tour Book... 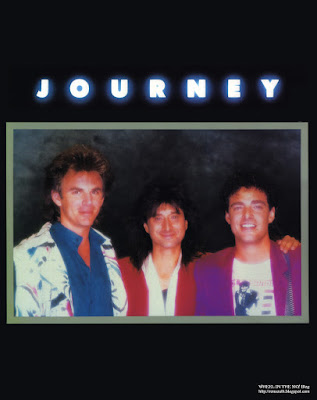 Also included in the Tour Book was an ad to join the Journey Force and the list of merchandise available at the time. It was one page, printed on both sides... 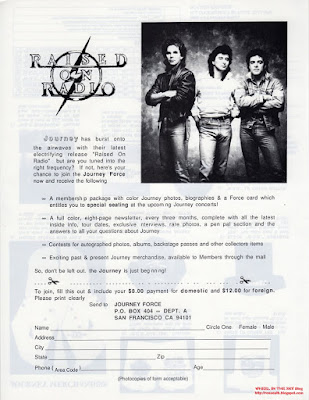 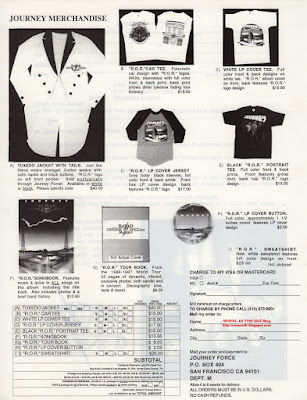 I've updated my video for the Wheel In The Sky (demo) with Robert Fleischman as lead vocalist with significantly better audio quality. This one does not sound muddy.

If you've never heard Robert Fleischman singing "Wheel In The Sky" with Journey, you are in for a treat! As Journey was recording songs with their new singer/songwriter there are a few demo's floating around from 1977. Of course, Herbie Herbert pushed Robert out to make a place for Steve Perry, but Robert's pop songwriting and singing style helped prepare the band for making rock and pop hits. Robert co-wrote this song as well as others on the "Infinity" album. Without Robert's contribution, "Infinity" might not have been "Infinite".

Sit back and taste a piece of Robert's magic...

I found Robert Fleischmann's side of the story. There's a great in-depth interview by Dave Golland with Jrnydv.com. For any Journey fan of the Gregg Rolie days, this is a must read! 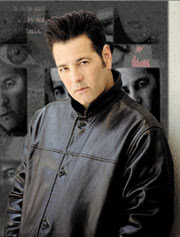