The album went #1 in America, the first and only time Journey hit #1.


The Live Recording of the concert in Houston on November 6, 1981, broadcast all over the World in 1982 is also released on CD as "The Escape Tour".

NEAL SCHON: 'The Door Has Always Been Open' For STEVE PERRY To Sing With JOURNEY Again

There's a great article at Blabbermouth.net about Neal Schon opening the door for Steve Perry to sing again with Journey. 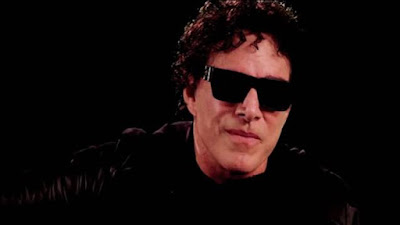 Here's what Neal says, "The door has always been open, like I've said a zillion times" "People ask me every day, 'Are you reuniting?' STEVE says 'No', and I say 'You never know'" 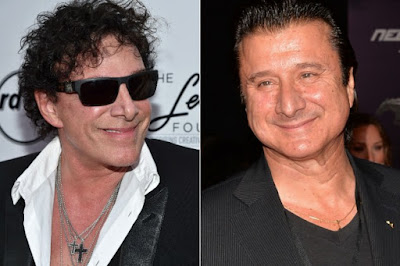 What a dream that would be.
Posted by WheelInTheSky at 10:29 PM 1 comment:

This is an exciting newsletter from The Journey fan club, it's like Christmas in July!

The first 4 pages of the newsletter start off with a big welcome to 1985! The band's famous Christmas photo is included along with news about ex-band member, Gregg Rolie.

There is very enthusiastic talk about the band working hard on the upcoming album. This is January 1985 and the next album, Raised On Radio wasn't released until April 1986, so I can only imagine how busy there were.

Also included is a page of Christmas cheer from each member of band! Steve Perry's Foolish Heart video included a wish to everyone a Holiday Message from all members of Jouney! Jonathan Cain has some sad news to share as well, and his connection to the motion picture "The Terminator".

The last page included this week talks about the boy dying of cystic fibrosis and as his last wish had the members of the band visit him in his hospital room. There will be more to come, four pages at a time... 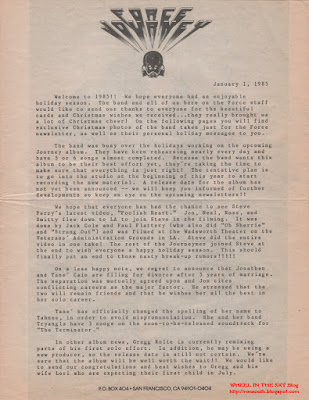 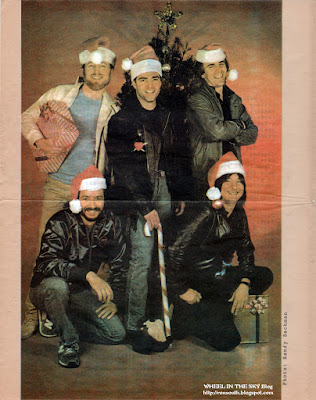 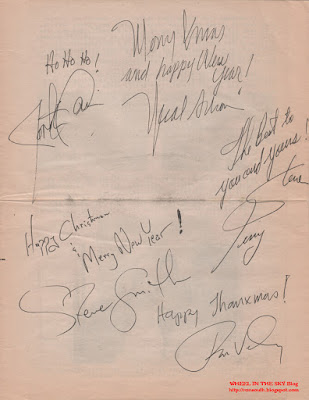 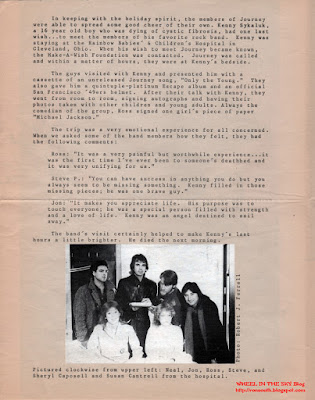 More next week.
Posted by WheelInTheSky at 10:00 AM No comments:

After the 1980 Departure Tour, Keyboardist and Vocalist Gregg Rolie decided to leave the band.

Jonathan Cain, the keyboardist for the band, "The Baby's", joined the band and they set out on the Pre-Escape Tour.

California was the first place the band played to an audience with the new line-up. I saw the band for the first time on June 7, 1981 at the Ventura County Fairgrounds in Ventura, California. They played 5 songs from the unreleased "Escape" Album!

It was November when the tour made it back to California and that's where I picked up this Tour Book. The last page is yet another version of how the band came together, so enjoy first 7 pages and please click on each one of them to see them better... 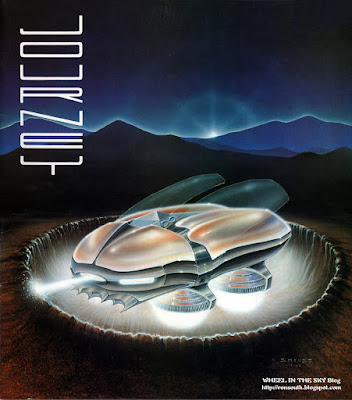 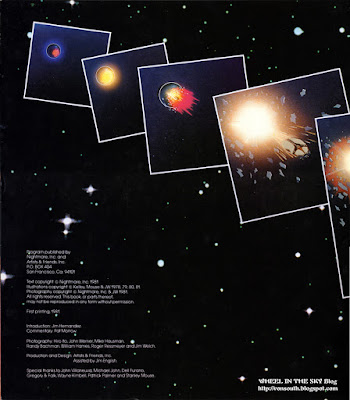 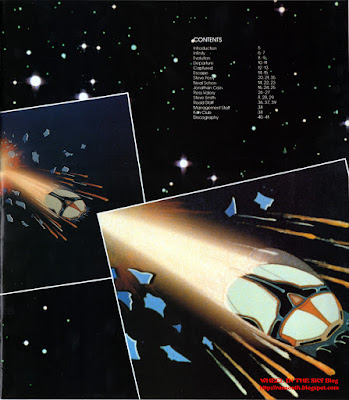 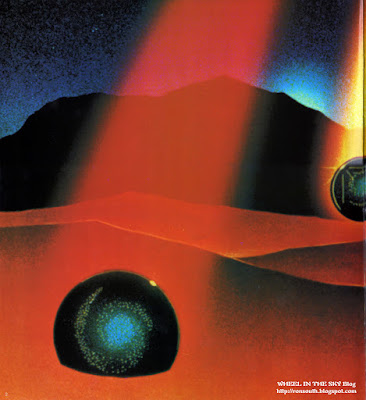 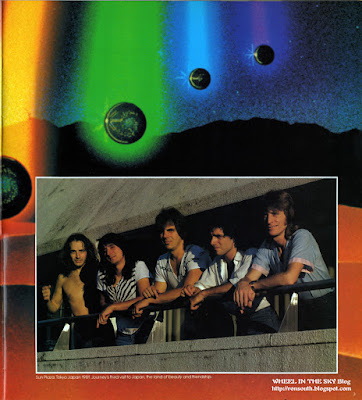 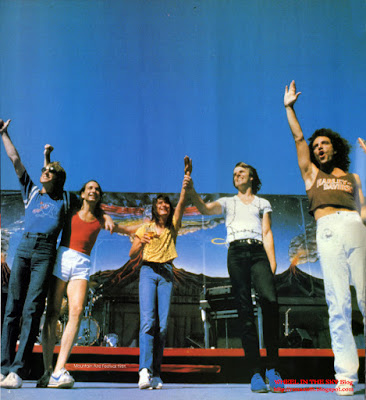 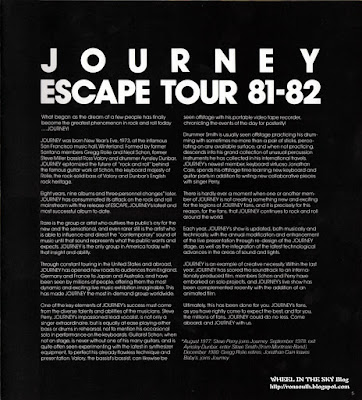 Posted by WheelInTheSky at 8:00 PM 2 comments:

The New Journey - 2001's Arrival with Steve Augeri on Vocals

In 1998 Journey released a song on the "Armageddon" soundtrack called "Remember Me".

Journey continued on with a new lead singer, Steve Augeri and a new drummer, Deen Castronovo.

The first album to be released with the new line-up was on April 3, 2001 when Columbia Records released "Arrival", Journey's 16th U.S. album. Actually 17 if you count "In The Beginning".

The album contains 15 songs in the U.S. and 16 songs in Japan. The Japanese release was in late 2000, while the U.S. release was delayed.

The Journey Force sent out many publicity photos at the time. Here are 3 more from my collection... 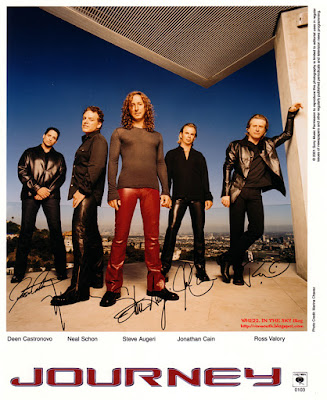 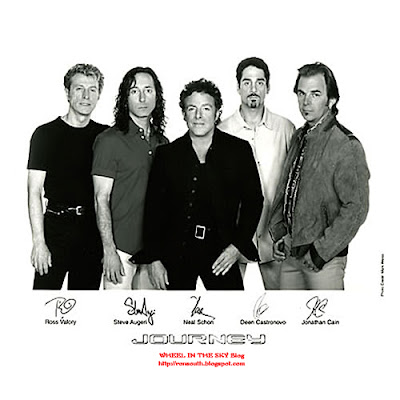 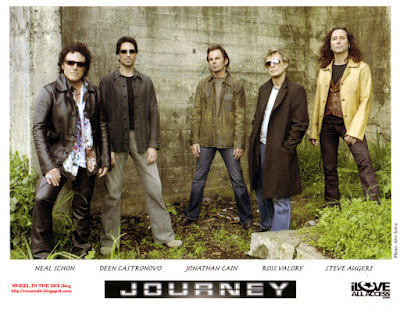 Journey's Friday The 13th show from July 13, 1979 proves stardom ahead in their future

Mid-way through the eight month "Evolution" Tour, on July 13th 1979, Journey went on stage at Assembly Theater in Tulsa, Oklahoma.

The band played for over an hour and 30 minutes playing hits from the "Evolution" and "Infinity" as well as a few songs from the albums before Steve Perry joined the band.

Steve's voice is a very nice addition to those which really make them come alive. I've always thought the balance between Steve Perry's and Gregg Rolie's voice is part of what made the band so special.

Here is a copy of the review that was in The Tulsa Tribune the next day, Saturday July 14, 1979.

It's a great review about the band, the show and the massive stardom they are about to embark upon. 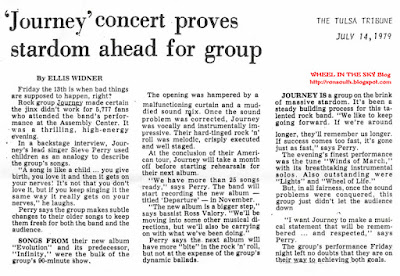 Posted by WheelInTheSky at 8:00 PM 2 comments:

In 1998 after Steve Perry refused to tour, he was replaced by a new vocalist, Steve Augeri.

Steve Augeri came from a manager position at The Gap clothing stores.

Before The Gap, Steve was the vocalist for the band "Tall Stories".

In 2000 the first Journey Album without Steve Perry since 1977 was released in Japan.

It took until April 3rd, 2001 before the USA would see the new album, ARRIVAL.

Here's a Columbia Records Press Release for the album with a biography of the band.

There are many stories as to what went on, but here's Columbia Records version of Journey's biography... 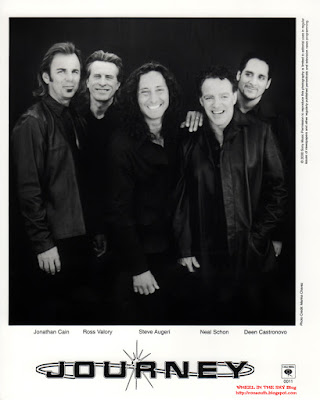 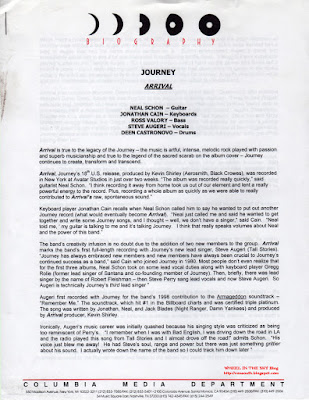 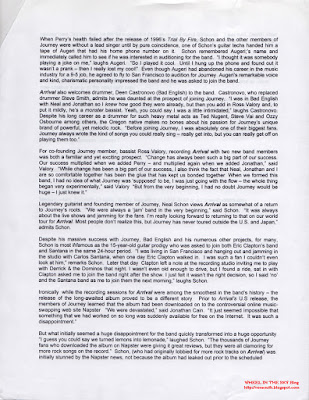 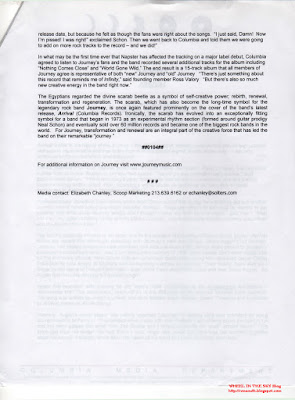 This is the Steve Perry "For The Love Of Strange Medicine" Promo Post Card from Fan Asylum.

The Journey Force had dissolved into a company called "Fan Asylum" which sold merchandise for a number of bands.

Steve Perry's 2nd Solo album, "For The Love Of Strange Medicine", released in 1994, came ten years after his first one, "Street Talk" which was released in 1984.

I received this Post Card in the mail promoting the Release date of the album as July 19, 1994.

The card is also a sticker which peels off the Post Card backing... 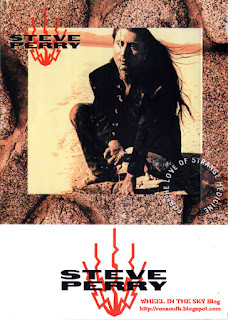 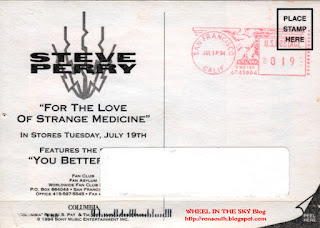 Frontiers, the 9th US album from the musical group "Journey".

Frontiers was the first album cover to deviate from the feathers and scarab ideas.

The pictures of the band were of them skydiving.

Skydiving, even 35 years later it doesn't make any sense to me, Skydiving?

Here's the Bumper Sticker which actually measures 2" X 12.5" including the black on the sides...

Posted by WheelInTheSky at 7:37 PM No comments: