This story is based on a musical I wrote many years ago, featuring twenty of Journey's best-loved hits. I had a week in hospital, recovering from an operation - what else was I gonna do? I wrote it originally with all songs taken from the Steve Perry heydays - from Escape, Frontiers and Raised On Radio. I spoke to Jon Cain after the Newcastle gig in 2008 and he suggested I could put some new songs in. So I re-wrote it with songs from Arrival and Revelations. It's kinda sat on the back burner since then, but I've thought about doing something like this many times. 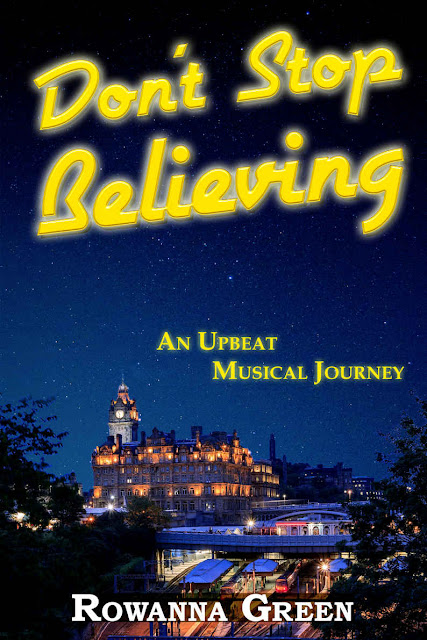 A failing marriage. A union separated by distance. An accidental encounter. Can the Edinburgh Fringe Festival work its magic?

Kathy’s life is a mess. Sure, the job’s great and her home is to-die-for, but she spends way too much time on the midnight train to catch a few fraught hours with her musician husband, Jimmy. While he’s away, Dan-next-door looks dangerously attractive.

On paper, Jimmy has it all. A talented wife, a successful rock band and nights in smart hotels. The gig at Edinburgh’s hottest arts festival is the culmination of years on the road, but the lack of harmony in his marriage makes him feel like a failure. He and Kathy fight to stay together, but events conspire to break them apart as they interact with colourful characters drawn to the Fringe.

In this rock-music-inspired tale, three love stories intertwine as each player is forced to take stock of their lives and discover what is truly important.
Posted by WheelInTheSky at 10:00 PM No comments:

We begin the second half of the Steve Perry For The Love Of Strange Medicine Tour 1994-1995 Tour Book with more pictures of Steve Perry.


These are great photos of Steve Perry and I'm sure his women fans can't get enough of these pictures. I would have rather had maybe one less picture, like maybe the second one shown below, and had instead some information about the making of the album and subsequent Tour or how they prepare for each concert everyday or something. What we have are pictures of Steve because after all, this is the "Steve Perry" Tour.

The Tour began on October 21, 1994 at the Riverside Theater in Milwaukee, Wisconsin. The Tour swept all across America and ended on May 22, 1995 in San Juan, Puerto Rico.
It brought back Journey songs to the concert scene again. Sadly though this also cemented the truth to the World that Journey was definitely over... 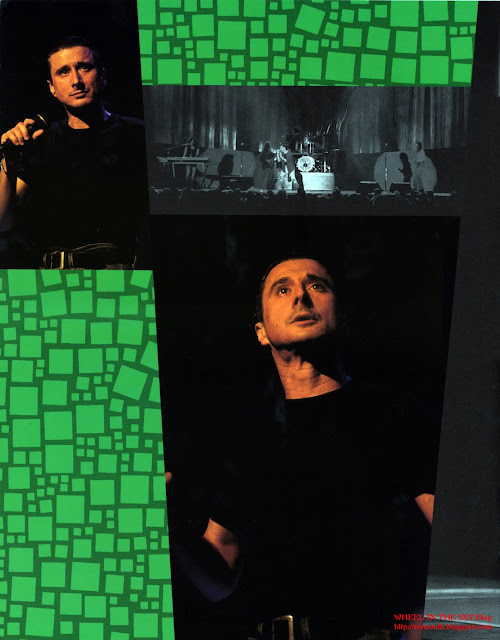 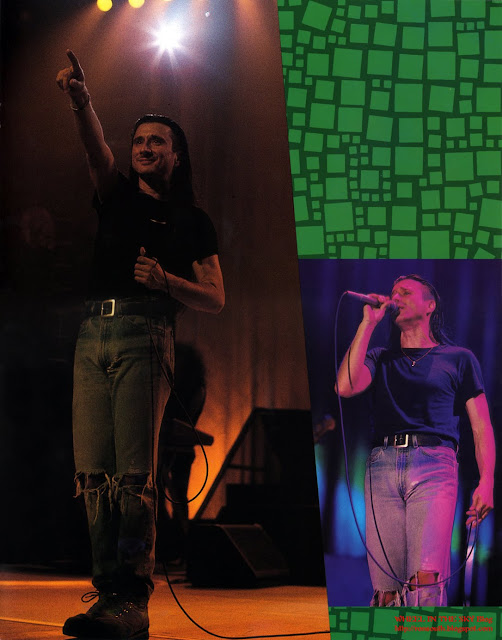 To Be Continued Next Week...
Posted by WheelInTheSky at 8:00 PM 1 comment:

The Final three pages of The Journey Force Newsletter from April 1, 1987 brings us PEN PALS.

Before the internet, before there even computers. Actually, before there were cars, there Pen Pals. With email, they have taken a whole new shape today. It was a way that people communicated over a long distance. If people moved to another State, someone you met at summer camp or on vacation, a distant relative, or whatever, it was the only way to communicate until the telephone came along. Long distance calls are more expensive so writing was the way to do it. It faded out as the years went on until email brought it back.

It looks like Journey is now offering a new "Raised On Radio" Jacket. I'm glad I passed on this one and very sorry I never got the "Tux & Tails" Jacket. I wish the merchandise wasn't only clothing, I wish they were more creative. The Car would have been cool. A Radio that played Journey songs and was a real radio would have really cool! Jewelry and things in the past were always great, but none this time around.

I no longer live at the address on the last page so I can't become your Pen Pal at that address... 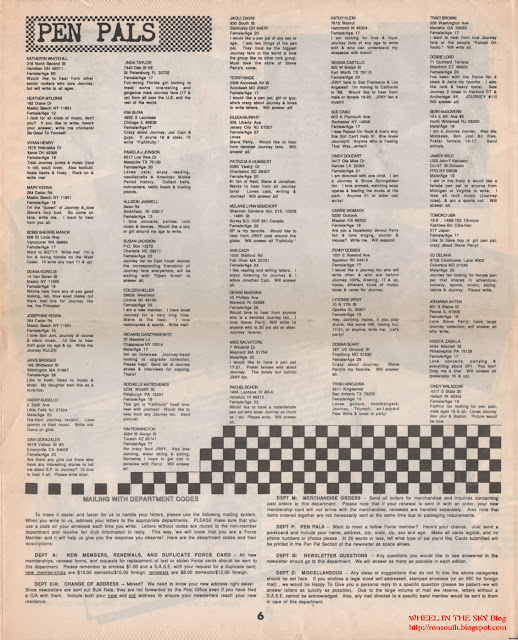 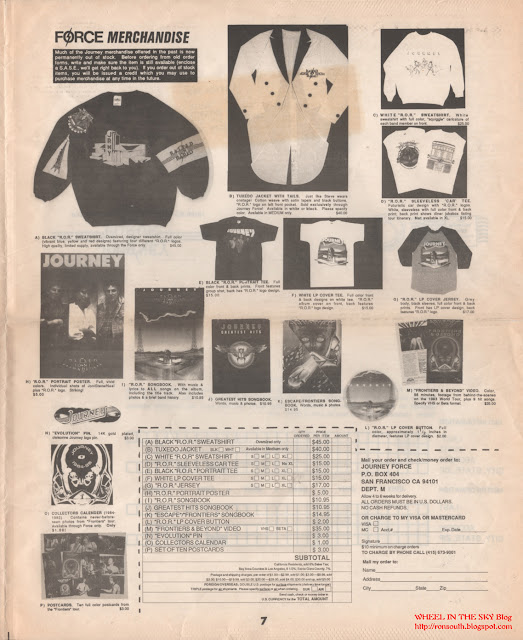 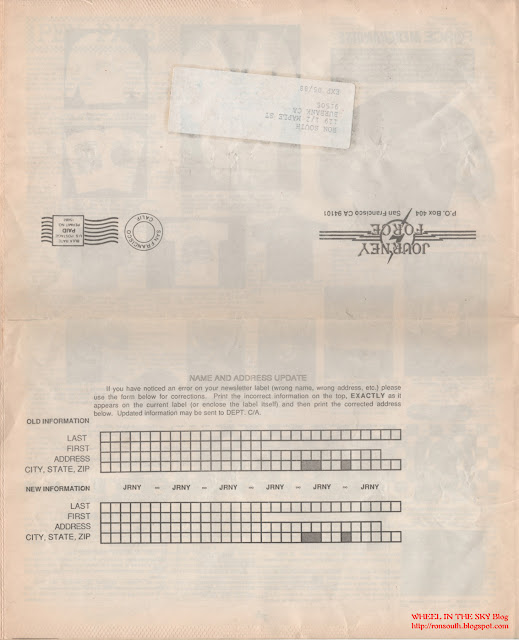 This week in the Steve Perry - The Love Of Strange Medicine Tour 1994-1995 - Tour Book we get two centerfold Posters.

The first Poster right before the actual center of the Tour Program has a great poster collage of the "For The Love Of Strange Medicine" band; 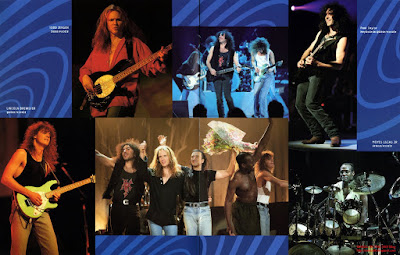 The second Poster, a centerfold of Steve Perry and Band on Stage; 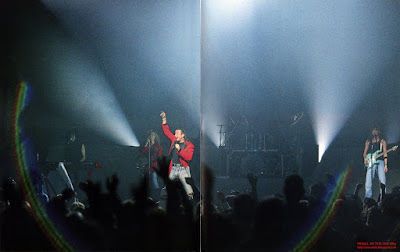 Continued Next Week...
Posted by WheelInTheSky at 8:00 PM No comments:

The Journey Force Newsletter from April 1, 1987 part 2, Bits and Pictures

This week brings you pages 3, 4 and 5 of The Journey Force Newsletter dated April 1, 1987. We begin with "Bits and Pieces" which talks about Journey winning 4 out of 6 Bammie (The Bay Area Music Awards) Nominations.

The next two pages are full of pictures of Neal Schon and Jonathan Cain with other musicians including Eddie Van Halen. We end on a picture of the band with The Journey Force Members in a Post Card mock-up... 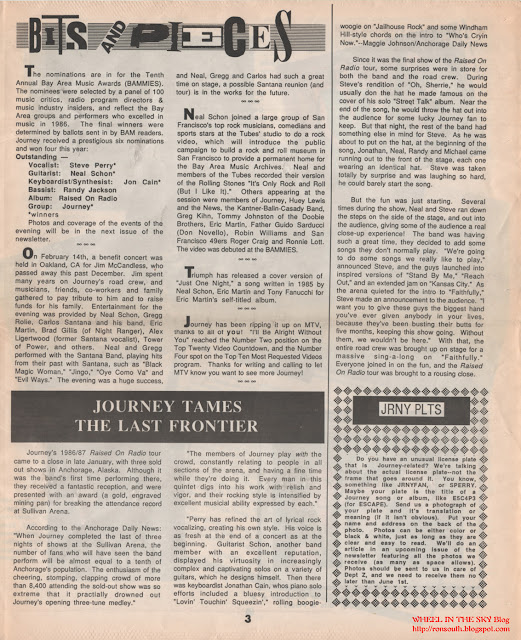 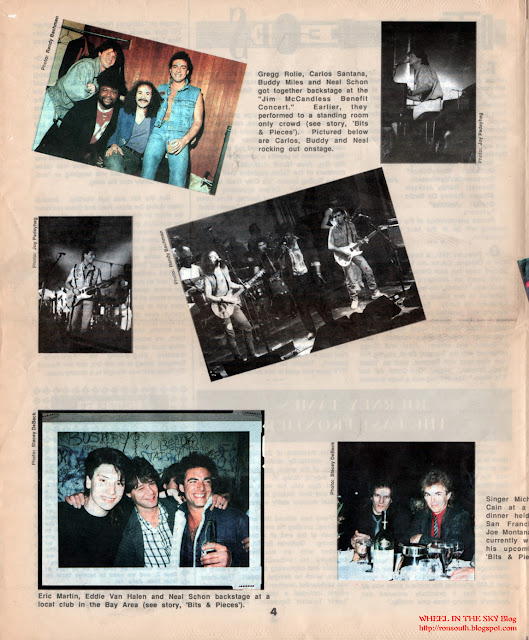 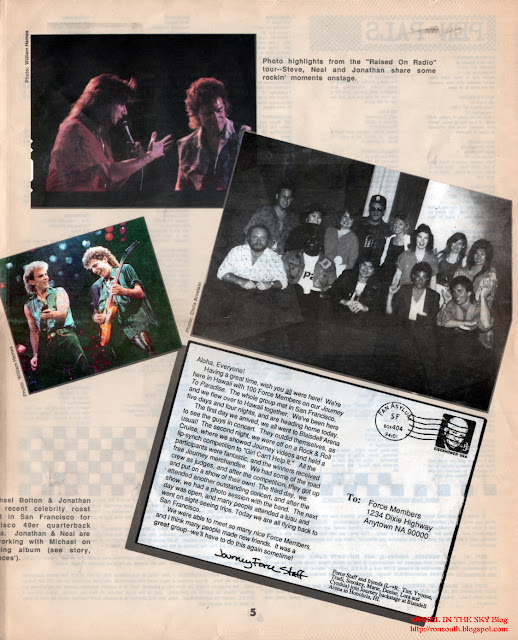 Concluded next week
Posted by WheelInTheSky at 10:00 AM 1 comment:

The next two pages of the Steve Perry For The Love Of Strange Medicine Tour Book are more great photos of Steve performing.

Following Journey's 1986-87 tour, Steve Perry disappeared. He vanished. Not only had Journey disbanded, but its frontman had become MIA.

"At the end of that tour, I honestly had to stop," he says, armed with the objectivity of one who has carefully observed these events from a safe distance of about seven and a half years. "I was suffering from serious fatigue, job burnout, and all sorts of other things happening in my personal life as the result of the 10-year burn." So, in essence, Steve Perry set out in search of Steve Perry. "I had to get off the merry-go-round," he admits. "And there is no easy way to get off when everybody else is on it with you. But it really felt that my life depended upon it."

In 1992, Steve hooked up with keyboardist/guitarist Paul Taylor, and things started to really click. "He had a sense of melodics in his chord changes that I had not heard before, and I liked a lot," Perry says of his new collaborator. A few months later, Randy Jackson (A VP/A&R at Columbia and himself an alumni of Journey) gave Steve a tape that had come across his desk. The demo was from a guitar player by the name of Lincoln Brewster.

In early 1993, Steve began recording the album. Perry and his band (along with a combination of Mike Porcardo, Larry Kimpel on bass, and Todd Jensen) entered the studio to begin recording For The Love Of Strange Medicine. It's his second solo outing, and ultimately comes 10 years after 1984's double-platinum Street Talk which produced four hit singles, including the #3 smash "Oh Sherrie" and "Foolish Heart."

"After eight years of absence from the music scene I must say that I never knew how much I loved something so much until I let it go. It feels good to be back." Back he was! The album, "For The Love Of Strange Medicine", was released on July 18, 1994, leaving him 3 months before this 6 month Tour would begin... 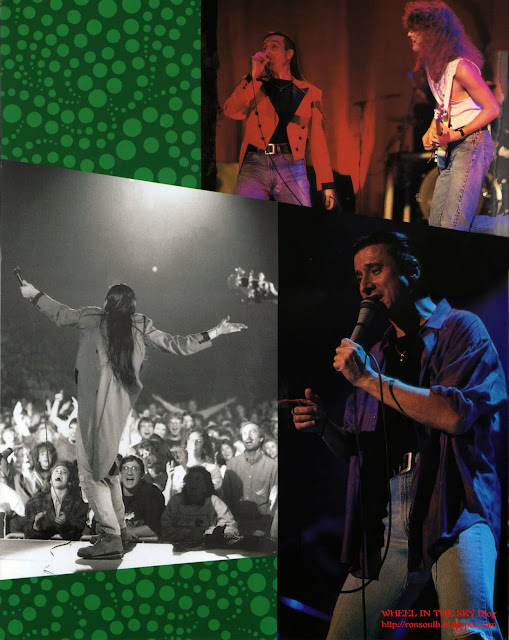 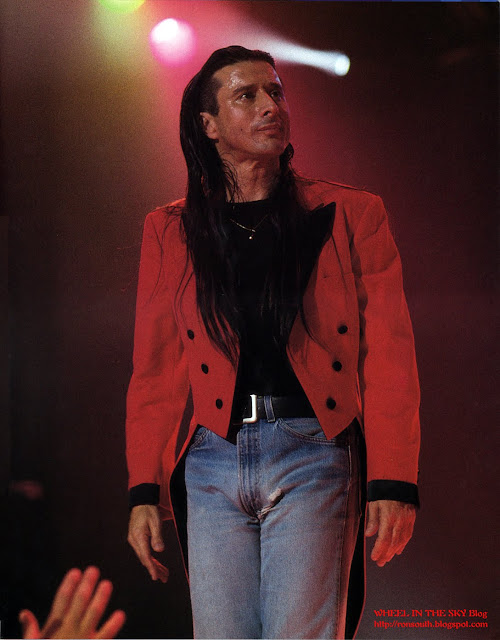 Continued next week...
Posted by WheelInTheSky at 8:00 PM No comments:

the first two pages of the Journey Force Newsletter from April 1, 1987 is mostly an interview with Neal Schon and Jonathan Cain. They talk about the Tour and what is in store in their futures,

The Interview makes it sound like the "Raised On Radio Tour" ended on a high note and the band members are going to be very busy very soon. The truth is in fact, the tour never made it to Japan as scheduled, Steve Perry ended the Tour early after the North American comitments. The only excuse ever given was that he just wanted to stop.

The Interview goes on to say that because the band members will be so busy with their upcoming solo projects that there won't be any time for "Journey" projects. Huh, what? Well, that should tell you something is very wrong in the Journey camp. What do you "no time for Journey"? That's what this whole thing is all about in the first place! They make it sound like it's OK because each band member have exciting projects ahead, including Gregg Rolie.


Win The Shirt off Journey's Back.

A simple contest where you can win one of the many shirts either Steve, Neal or Jonathan wore during the "Raised On Radio Tour". That would be one of the coolest Journey memorabilia items ever! 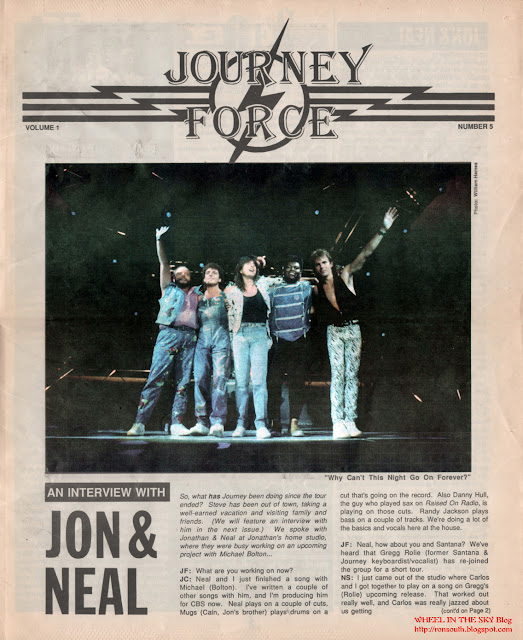 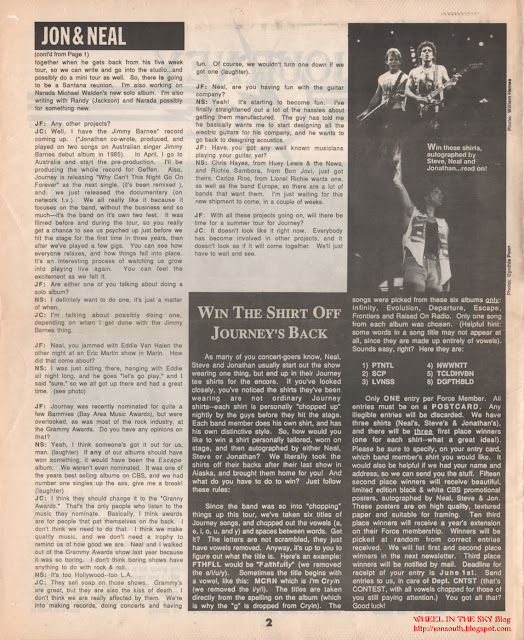 The next two pages of the Steve Perry For The Love Of Strange Medicine Tour Book are full page photos of Steve performing.

The album, For The Love Of Strange Medicine was released on July 18, 1994. It wasn't nearly as successful as Steve earlier album, 1984's "Street Talk". The album did reach "Gold" status

There is rumor of an album coming sometime in the future by Steve but I wouldn't hold my breathe. 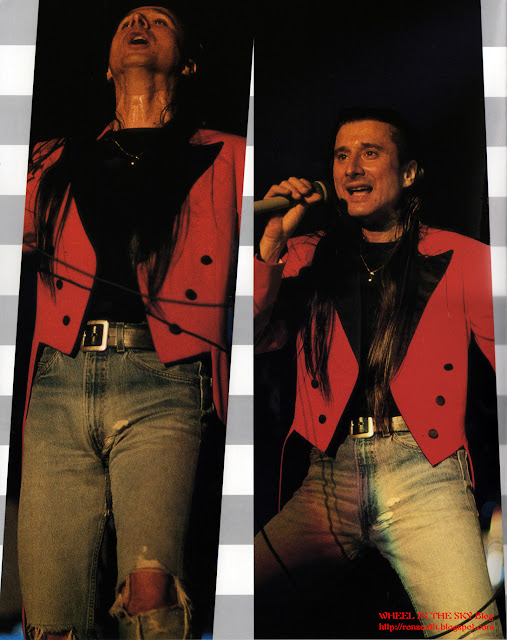 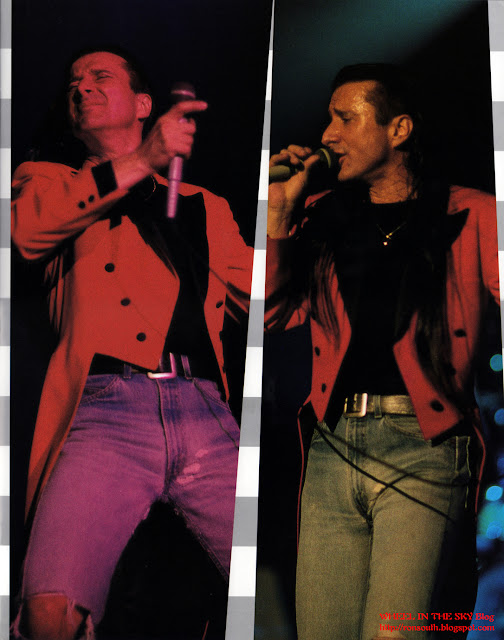 Continued next week...
Posted by WheelInTheSky at 8:00 PM No comments:

The very last issue of The Journey Force Newsletter was sent out in January 1994. This was the end of the 20 year Journey and all that was created around it.

The Merchandise portion of The Journey Force turned into Fan Asylum which was a merchandise outlet for many groups including Journey. Steve Perry was not part of it.

Steve Perry started the "Steve Perry Information Network", or "S.P.I.N." This was supposed to be  network of members that would work a lot like any fan club except the internet was beginning so the word "Network" got confusing. I don't exactly know how long it was in business or how well it did. My guess is that it died out after the excitement of Steve Perry's new album and tour was over.

Here is the postcard with all the sign-up instructions and what the $25 price will cover... 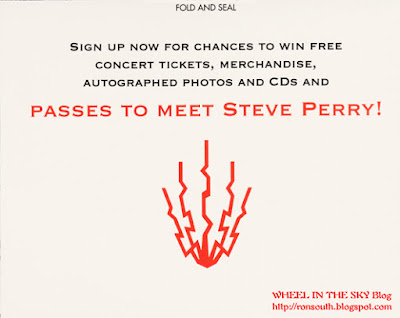 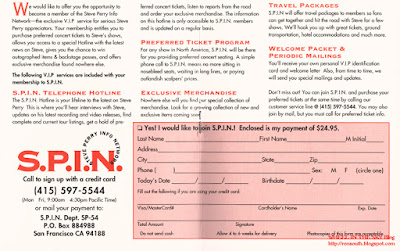 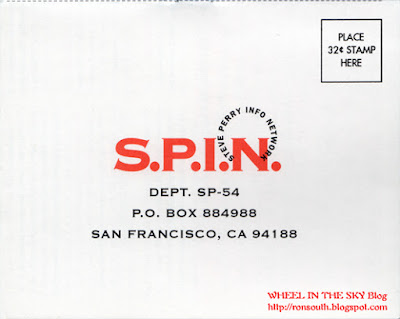