There are two posters from the 1983 Frontiers Tour Program featured this week. The Frontiers Tour was a grueling 8 months around the World and back again. When the Tour was over Steve Perry started working on his first solo album, "Street Talk" while Steve Smith went back to record with his other band "Vital Information". Neal always had side projects and he really expanded on them during this time.

This is the first time "Journey" didn't work on new songs during their Tour, they concentrated on the solo projects which kept delaying any work on a new album for far too long.

The first poster is a great shot of the band on Tour. It doesn't even matter that Steve Smith is just an added shot in the corner. Way back in the dark, Ross Valory ended up having the least flattering shot of the group. 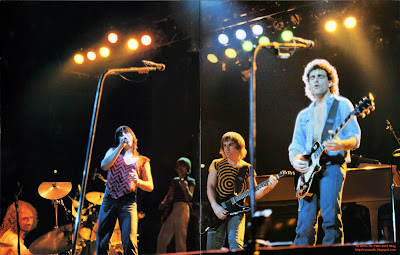 This next one is the Centerfold Poster. It's an excellent shot of the band playing. There are also insert shots of each member of the band. It would seem that Steve Perry and Jonathan Cain never change their shirts on Tour. 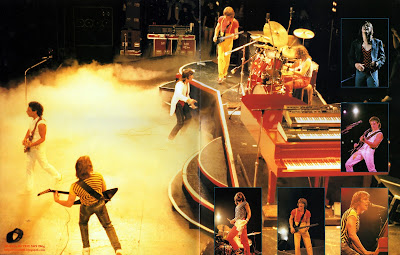