Neal Schon and Gregg Rolie, original founding members of Journey are joining Carlos Santana in a SANTANA reunion with all original members. The Tour began in Las Vegas at the House Of Blues on March 23, 2016. 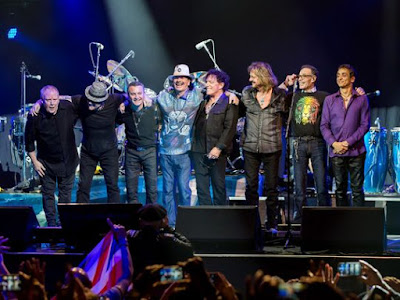 The Review in The Las Vegas Sun Newspaper;

By John Katsilometes
The original members of Santana are architects of so many rock ’n’ roll traditions: Lengthy guitar jams. Thunderous percussive stops and starts. Calls from the stage for LSD intake.
Carlos Santana got high with a little help from his friends Monday night. We’ll qualify that he was likely spiritually high (wink). But whatever the case, the feeling at House of Blues at Mandalay Bay hearkened to the heady days of the 1960s as the core of the band that recorded the first three Santana albums resumed the jam for a live recording to be issued as a live DVD and also air on national television (specifics on both projects have yet to be released).
Oh, and there is a new album, or “product,” in the offing: “Santana IV” is to be available for purchase online and in CD form April 15. The first single, “Anywhere You Want to Go,” was released in February and has topped the Billboard Classic Rock charts since its first week.
“Santana IV” is the long-anticipated album recorded at Henderson’s Odds On Studios over a three-year period ending last May. Reassembled were guitarist Neal Schon, keyboardist/vocalist Gregg Rolie, drummer Michael Shrieve and percussionist Michael Carabello.
The brainchild of Schon, the reconvened graybeards simply roared through a two-hour set that blended the classics from Santana’s infancy to the new release. The crowd chant from Woodstock ushered in “Evil Ways,” “Jingo” and “Everybody’s Everything” and accelerated through the evening. At the encore, Ronald Isley of The Isley Brothers strode out for “Love Makes the World Go Round” and “Freedom in Your Mind” from the new album.
Santana was in the spirit with his omnipresent fedora, this one a beige number, a gold Gibson and multicolored shirt with a sketch of his image splashed over the front. Schon was his guitar-god sidekick, alternately complementing the sound with his own distinctive guitar licks and the fashion in his black jacket, slacks and shades.
The visual quality matters as this was a video as well as audio showcase, with the “Santana IV” album art looming behind the band. But the music was dominant, a nearly unbroken stretch that stitched the early Santana classics with songs from the new album.
Santana also connected the eras with his requisite political rant. Repeating a statement from a photo opp at the HOB entrance Monday afternoon, he told the crowd, “During Woodstock, there was the Vietnam War, Richard Nixon and LBJ. Now we have Donald Trump and the same sh*t.” That fired up the crowd.
This one-off concert was certainly an artistic and even physical challenge, as a sweat-soaked Shrieve muscled through the set as if running a steeplechase. But the band was super-tight in the circuitous course set by the ever-whimsical Santana. There were moments when the music was so powerfully performed, you almost couldn’t think straight, which is fine for avid Santana fans. At one point, Santana did advise, “If you have any mescaline or LSD, now is a good time to take it.” Many in the audience had apparently already sampled some medically approved herbal treatment.
Similar to the music made from the stage, you’re not exactly sure where this Santana lineup is going. Nor are they.
“We’ll see what happens, but I can tell you we have really enjoyed playing together again,” Rolie said before the show. “We all have lives and schedules, but if we could work out a tour or something like what Carlos has here (a residency at HOB), that would be fine with me.”
Rolie and Schon were the ones who broke from Santana originally to create Journey, and that band’s latest formation played a residency at the Joint at the Hard Rock Hotel last year. “It’s an easy thing to sit down and play that type of run,” Schon said, also before the performance. “But we’ve got so much going on already. We’re touring together a little, and Journey is back here (at Mandalay Bay Events Center) in August. But you never know. It was great to see all these guys again, that is for sure.”
The Journey-Santana dates are April 13-15 at Madison Square Garden, Mohegan Sun Arena in Connecticut and PPL Center in Allentown, Pa.
In that pairing, Santana has mused of straddling both eras, performing with his own band, then with Schon and Journey. Even when sharing the stage with a such a great as Schon, Santana still calls the shots. As Schon said during a conversation at the Hard Rock last year:
“I was just 15 when I joined with him, and he was everything to me. If he went to the store, I went to the store. He went down to the guitar shop; I was at the guitar shop. We went to get a burrito; I was at the burrito place. So, I was like his little puppy dog that he took under his wing.”
The hang Monday was House of Blues in Las Vegas, and where this leads is anyone’s guess. 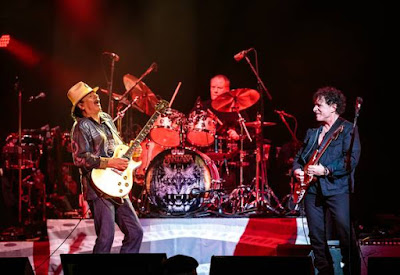