Gregg Rolie was Journey's original Lead Singer before they actually went looking for a Lead Singer.

Journey started out as a jam band, the songs were very long instrumental songs and if vocals were needed they were done by Gregg. The other 3 or 4 members contributed to the background vocals.

They ended up finding it twice in 1977. The 4 remaining members of the band wanted Robert Fleischman who had a great voice and he fit the bill perfectly. At the same time Herbie Herbert received a tape from Columbia Records of a singer named Steve Perry. The story goes that after Robert was hired, Herbie insisted on Steve Perry being the lead singer and there was some back-stabbing and who knows what that went on behind the scenes.

WHEEL IN THE SKY (Demo) 1977 JOURNEY with Robert Fleischman vocals
In interviews, Steve Perry, has said many times proudly how they would have Robert not be at a gig or Steve would be working backstage and then come on stage during the show while Robert was away. What? What a shitty thing to do, really, they had to be sneaky like that? It doesn't make sense anyway. If Robert is the lead singer of the band where could they send him during a show? Who's going to sing his part? That's ludicrous, I mean did they send Robert to the hardware store to pick up some cables? It's during a show, Robert's the lead singer, he's not going anywhere.

There really isn't a way to find out what really happened as all Journey members past and present are under gag orders to not talk about these types of things. Journey always a democratic band that got along perfectly, so we were supposed to believe at the time.

I'm wondering if they ever considered a woman as lead singer. That would have been interesting, maybe Neal should be looking into that now.

It seems there is and only will be one true lead singer in the band Journey and everything else fails in comparison. Yes, Steve Perry made the band it into one go the biggest bands in history, he also tore it apart and discarded it leaving the fans in the dark.

Let's now take a moment and take a look at the man that almost had that spot, or had it for a very short time, Robert Fleischman... 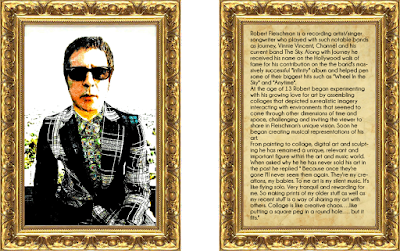 Visit www.robertfleischman.com to keep up with Robert!

Visit www.robertfleischmanart.com to see Robert's art and the "Wheel In The Sky art print".


Visit www.theskyofficial.com  for information on Robert's current band "The Sky"

More to come on Robert Fleischman
Posted by WheelInTheSky at 7:00 PM

Email ThisBlogThis!Share to TwitterShare to FacebookShare to Pinterest
Labels: Infinity, Next, Photo, Robert Fleischman, Wheel In The Sky